Today in Dutch History: A Journalist, Fighter, and Poet 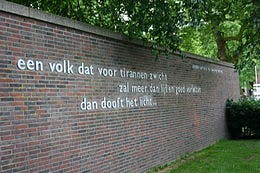 Today in 1909, HM van Randwijk was born in Gorinchem. Van Randwijk was a poet, journalist, and Resistance fighter who founded Vrij Nederland, a liberal paper that is still being published today. A teacher before the war, he joined the resistance to German occupation and founded an underground paper at great risk, as it gave Dutch citizens accurate information on the state of the war and the Gestapo worked tirelessly to punish those who printed or even owned such papers. After the war, his advocacy for independence for the Dutch East Indies forced his resignation as Editor.

Today, he is remembered in, among other things, a monument on Weteringplatsoen, across the canal from Heineken and De Pijp. In 2000, a monument was erected on both sides of the street to mark where 30 of his fellow resistance fighters were executed by the Nazis, their bodies left in the street. On one side, tucked amongst the trees is a statue. On the other is a brick wall with van Randwijk’s verse:

A people that to tyranny yield,

Shall more than life and goodness lose,

They destroy the light.