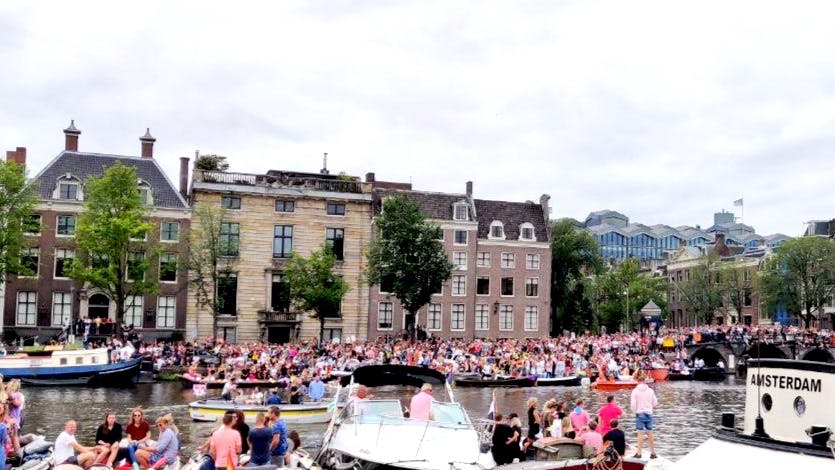 Every year, the same question becomes a drumbeat leading up to Pride: does it still matter? Some say it’s become a corporate parade of rainbow decorations and a chance for straight, cis people to get ally cred by partying instead of doing the hard work of showing up to rallies or confronting homophobic family members. It’s hard to look at the hundreds of thousands crowding Amsterdam’s canals and squares without wondering what could be accomplished if all those people spent the rest of the year lobbying for LGBTQ rights.

For me, this year’s Pride came at the end of a couple of months of intensive research into Amsterdam’s LGBTQ history. (I can now explain why Amsterdam Pride is the first Saturday in August rather than the last Sunday in June.) I was launching an LGBTQ storytelling walk, so I dug deep into the city archives to learn as much as I could about the individuals on my tour. While there are inspiring stories and people on my walk, I spent the days leading up to Pride researching the victims of the first of four anti-gay persecutions to sweep the country in the 18th century.

When I started to walk down the Amstel, the first boats in the parade were heading towards the judges’ stand. The cleverly placed corporate logos and groups of already tipsy straight/cis-appearing partiers in rainbow halter tops made me want to start beating my own relevance drum.

And then a sight across the river stopped me short.

I was opposite two huge 17th-century mansions, one of which is inhabited by a family that’s been in Amsterdam for more than four centuries. The balconies and front stairs of these icons of the past were crammed with people waving rainbow flags. The street in front of them was packed with people cheering for a boat of dancing drag queens. So were the people in the boats on the riverside and the historic canal bridges on either side of the houses. The government buildings behind them and to their left were waving huge rainbow flags.

Without warning, I burst into tears, the kind that feel like choking. Two days earlier, I’d found the interrogation notes of the first four men executed in Amsterdam. They’d each been interrogated multiple times over months, each desperate to save their own lives without accusing anyone else. I knew as I slowly deciphered the spidery handwriting that two of them would be strangled then burned and two of them would be drowned. I’d already seen a print of the flyer announcing their execution.

All I could think is what it would mean to them, to see what Amsterdam would become. Yes, we still have a long way to go. But it is a monumental thing that Amsterdammers come together to celebrate the rights and freedoms of a tiny part of the population, one that has been brutalized and denigrated for hundreds of years.

Remembering the past isn’t just about remembering its victims or its heroes, though we should. It is a marker by which we can see how far we have come and a warning of what we could slip back into, if every person who wore rainbows last Saturday doesn’t carry the fight through the rest of the year.

If that image taught me to #rememberthepast, the next boat showed me how we’ll #createthefuture.

It was full of LGBTQ-supporting parents who called themselves the “boat for the future”. So many of my generation clung on by our fingernails until we were 18, while friends who came out – or were outed – lived on the street. The only supportive parents I remember from my group of friends in the ‘90s were a lesbian couple and an elder sister who’d become her sister’s guardian.

The children of the parents in that boat are growing up in a world in which the entire city turns out to celebrate them and their parents celebrate their orientation instead of trying to punish it out of them. Their straight and cis peers are growing up in a world where they have annual encouragement to accept and celebrate diversity of gender and sexual orientation. I can’t imagine what it would be to grow up like that, and I can’t wait to see what these kids will do.