Meet Me at the Crossroads 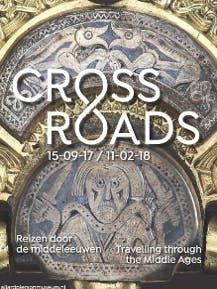 Everyone knows that after the fall of Rome, people lived in poverty and ignorance, never moving from the place they were born. That’s why it’s called the Dark Ages. The Allard Pierson museum’s recent Crossroads exhibit used multimedia alongside artifacts to completely dismantle this idea. They trace but both the waves of migration and individual’s journeys that spanned empires.

They were men and women and their experiences varied widely. Egeria, one of the earliest Christian pilgrims, wrote about her travels from Gaul to the Holy Land. Theophanu, the niece of the Byzantine Emperor, was born in what is now Turkey and traveled to what is now Germany to marry the Holy Roman Emperor, spending the end of her life in Nijmegen.

It’s easy for the smaller museums to get lost in the clamor of the likes of the Rijksmuseum, Van Gogh, Stedelijk, and Mauritshuis. Crossroads was a great reminder that every museum has the potential to inspire.