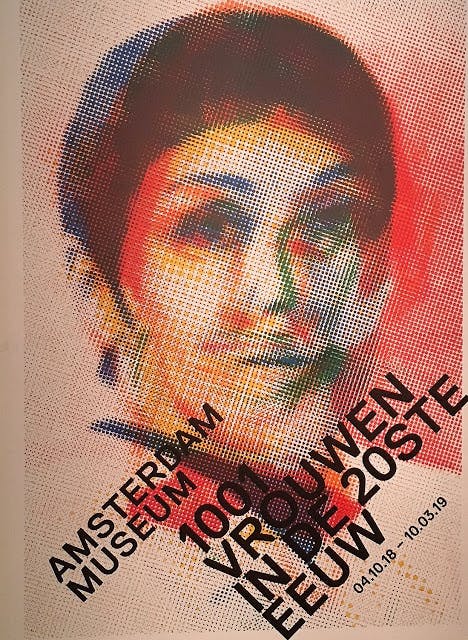 I’ve never seen anything like “1001 Women in the Twentieth Century”, the exhibit currently running at the Amsterdam Museum. I’ve been researching and writing about women’s history for years. I’ve sought out exhibits about women’s history wherever I’ve traveled, obsessively checked sites like Rejected Princesses, and practically wore a path to “The Dinner Party” when I lived in New York. What’s happening at the Amsterdam Museum is still new to me.

The exhibit was curated by a historian and writer named Els Kloek. She is the editor and driving force behind the book 1001 Women in Dutch History and its new sequel, 1001 Women in the Twentieth Century. Both books are comprised of fascinating biographies of women of all stripes of morality, class, and calling. The exhibit is a partner to the new book, but the design is quite extraordinary in its own right.

The exhibit, which is in both English and Dutch, manages to tell many stories without overwhelming the viewer. You meander through a series of rooms in what feels like a logical progression. The final room is a library of sorts, with a collection of reference books and white walls covered in the black-printed names of 1001 women from the Dutch 20th century and brightly-colored stickers on which guests have written their heroines. It is only there that you realize the range of stories you’ve just taken in.

The rooms are in chronological order, with a rough theme given to each generation. Along the floor is a timeline of firsts, such as first female doctor, first female minister, first female mayor, etc. Along the walls are interesting women from each generation. These are generally women who made some sort of impact, not necessarily in women’s rights and not necessarily for the better. The scientist who advanced the state of dentistry is balanced by the government official who facilitated Nazi rule. The stories cover everything from urban planning to performance art protests, from guerilla fighters to heads of state. Each generation also has a selection of video that gives a sense of the time and a collection of objects that tie abstract stories to concrete reality.

Most of all, the exhibit is layered storytelling. In perusing the individual stories, you unknowingly take in a larger story. In every generation, women of all backgrounds have fought for the people and

ideas that they loved. Their struggles shaped their homeland. It would be phenomenal in any country, but it’s especially interesting in one that is so often ambivalent about its past.