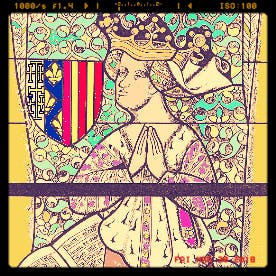 I’m just finishing up my last year of theater school. One thing everyone keeps telling me is that luck is important. Like you have to be good, you have to be professional, you have to keep working at your craft. But ultimately, there’s an element of luck that is beyond your control. So what can I do to make sure luck breaks my way?

I suggest you stop looking for her and instead become your own Lady Luck. If our faith defines how we move through the world, do you see how looking for outside intervention sets you up to be a passive spectator? I suggest instead you put your faith in this: there are far fewer people in the world stymied by luck than by their own inability to perceive the opportunities that come their way.

It’s easy for me to refuse to believe in a force that let me down so shamefully. Every time my future hung in the balance, the scales tipped the other way. But look what I made of it. My son-in-law, once reduced to my daughter’s domains, became King of France in the face of England and Burgundy. I wore the titles of four kingdoms, but never a crown; my children and grandchildren ruled over England and France. There was not a major house in France untouched by the English slaughter of Agincourt, yet the English were slinking out the door by the time I left France to my children.

It’s hard to know which story to tell you. I could begin with my forced marriage to a French duke, which took me away from my native Aragon and barred my inheritance. We developed a partnership that saw him spend his life pursuing his Italian claim while I ruled a vast and wealthy Duchy. I could tell you of the terrible realization that my royal brother-in-law was struck with a madness that changed him from a just ruler to a pawn in the war between his brothers. I surrounded the king with my supporters and betrothed my daughter to the king’s son.

I prefer to tell you, though, of our most desperate hour and how it was transformed by creating an icon. England and the Duke of Burgundy ruled most of France. My son-in-law, Charles, had become the rightful king upon the death of his father, but few outside our domains acknowledged it. The English besieged Orleans and we knew that when it fell, so would we all.

I heard word of a peasant girl who claimed God had called her to remove the English from France. Such things were not uncommon, you understand. After a century of violence from passing armies and mercenaries, most of the peasants had gone a little mad. My informers told me this girl was different though and when I met her I could see why.

To this day, I do not know if she was touched by divinity or madness. There was an intensity about her that put my own sense of purpose to shame. Her story was absurd, of course. Men trained from childhood to fight with heavy swords, weighed down from armor. I was not sure she had the strength to enter the fray and certain she hadn’t the strategy to direct it. Anyone else would’ve turned her away out of hand, but I saw the opportunity she presented.

Joan of Arc shamed Charles’ men into risking all to raise the siege. Alive, she inspired the army to turn the tide of battles against the English. When the English martyred her, she became a holy symbol, first maintained through whispers, then canonized through Charles’ legacy. You may feel that luck brought Joan to my attention. I say to you that it was wisdom to see her potential and boldness to risk all on her. Rather than look for some mythical goddess to bless you, I suggest you study the landscape and find your opportunities.

That said, there are two reasons your teachers tell you about luck. When you look back on your life, it can be a comfort to see how much is out of your hands. Leave such comforts for when you are in dire need of them. Do not let them dull your edge when your fighting spirit is still necessary.

If you are a woman, there may be a more insidious motive. We are judged for aggression and in a business with politics, that judgment can be destructive. They said I had a man’s heart in a woman’s body, just as they would say of my granddaughter Margaret. The chroniclers said it so often, one would think they might reassess women’s hearts, rather than simply wear out the phrase. I had to learn to present a demure mien, even as I was going to war. You may have to do the same, but don’t confuse your appearance with your spirit.

Seek opportunities and leave luck to others.