Crushing on a High Schooler, answered by Wu Zetian 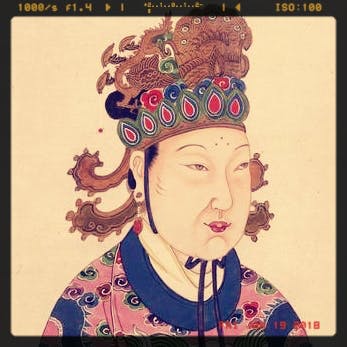 I really like this guy. We’re totally on the same page and he’s cute as hell. The catch? He’s about to start college and I’m about to finish it. He’s eighteen, so it’s not like illegal or anything. But is it too weird if I ask him out?

Crushing on a High Schooler

Dear Crushing on a High Schooler,

Your question is one entirely of your own society. In the Middle Kingdom of my birth, an eighteen year-old man would be well launched along his career. If his family had any connections, he would be exerting authority over others, in our court bureaucracy or in the field of battle. I was fourteen years old when I became a concubine to Li Shimin, who in turn was only nineteen when he overthrew the Sui and founded the Tang dynasty with his father. I believe the man history knows as the Taizong Emperor saw something of himself in the ambitious young woman I was, for it was through our conversations about history and politics that he came to patronize and support me.

This is not to say that the rules of your society are to be ignored. I was born into a land steeped in the philosophy of respecting your place. As a woman, I was born to follow and never to lead myself. I ignored that rule, as I did many others, but I needed to be aware of the rules that others expected me to follow. It would determine their actions and I could adjust mine accordingly.

I knew that the Taizong Emperor would die when I was still young. The rule for widowed concubines without imperial sons was to spend the rest of their lives in a celibate monastery. I tried to get a son, as all women did, but I also cultivated my relationship with his heir, as well as my relationship with his wife. Li Zhi came to rely on me, to depend on me, to admire me, and to lust for me. His wife believed she could trust me.

When Li Zhi became the Gaozong Emperor, I shaved my head and became a Buddhist nun. While I waited to see if my gamble would pay off, I gained a useful tool in my rise to power. Confucianism, the religion of the courtly classes, would never accept a female ruler. As I learned about the recently arrived Buddhism, however, I realized that it would support me.

The Gaozong Emperor brought me back to court with the approval of his wife, who thought to use me in a power struggle against the main concubine. Within five years, I had both exiled and killed by framing them for witchcraft and the murder of my daughter. By the time I had secured my faction by purging the court of those who opposed me, poor Li Zhi, my Gaozong Emperor, had been struck by a debilitating weakness. He depended on me for everything. It was my orders that went to our army as they conquered Goguryeo and my words that became law. I was only thirty-six years old and I was controlling the kingdom at the center of the world.

I ruled behind the screen of first the Gaozong Emperor, then two of our sons. The other two I sent into exile with great disappointment. Finally, I took power in my own name. Plenty disapproved, but I had made my unshakable base with factions throughout society and Buddhist support to counter the Neo-Confucian denunciations. I reformed the court administration and gave the people a direct path to make their voice heard. Surely, I deserved my dalliances. What emperor wouldn’t?

I was decried for being a sixty year-old woman with twenty year-old men her bedchamber, but no one decried the Taizong Emperor for having teenage concubines. For fifteen years, my personal rule was strong enough to allow me the freedom I’d always sought. I didn’t let go of it or my favorites until I knew that my eighty years were all I’d been allotted. My daughter was angry that I abdicated in favor of her absent brother, but I knew my sweet girl didn’t have the stomach for the violence a woman needed to use to secure her throne. It takes great force to break social strictures and escape unscathed.

So, what do we learn about the rules of your situation? Li Zhi was only four years younger than me, but to a relatively inexperienced teenager, I seemed to be the epitome of adult sensuality and grace. This suited me, but will you be comfortable with this expectation? Do you believe he sees the person you are, or the freedom of a college woman? You both are at a time when your primary allegiance is to your peers. Are you comfortable with his high school friends? Will he be comfortable with yours? Are you prepared for the censure of your friends? Most importantly, as you prepare to leave college and start a career, are you prepared to be pulled back into the concerns that dominated your thoughts four years ago?

These are truly questions and you are the only one to have the answer. Four years is not so much when you are older, though currently you occupy much separated social spheres. If you answer these questions with a yes, then charge ahead with authority, knowing there is power in transgressing unneeded social rules.

Born February 17, 624 AD in either Lizhou or Chang’an to the rich timber merchant Wu Shihuo and his wife from the powerful Yang family. Died of old age on December 16, 705 AD and was buried under a marker that remains blank to this day. Wu Zetian is the only woman to rule China as Emperor under her own name. She is often presented as a villain who murdered her own children to seize power, but it can be difficult to separate fact from fiction, as most of the documentation from near her time was written by people who loathed her. It is undoubtedly true that she ruthlessly purged the aristocracy, but also implemented reforms that made life easier for the classes below.

For an interesting article regarding the historical trail of Wu Zetian, check out Smithsonian Magazine.