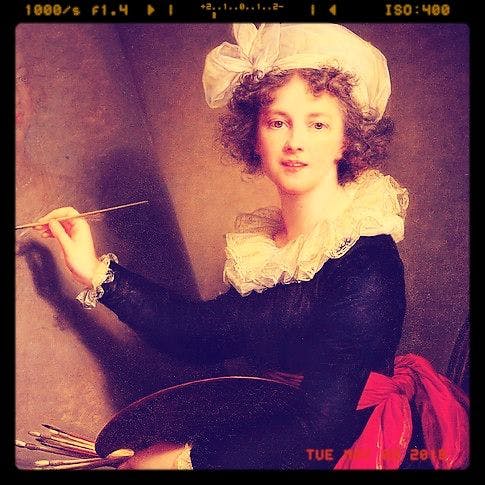 At what age do you lose the right to have large birthday parties organized by someone other than yourself and how do you get that person out of a cycle of unrealistic expectations?

Hard work and inborn skill created my talent, but parties made my career. The France of my youth was an effervescent jumble of dinners and suppers and promenades and dances. Women drove the social whirl and so possessed a degree of influence unthinkable in the France of my twilight. Even after fifty years, I long for the sunlit contredanse that was obliterated by mob and blade. There was a merry competition to seize the story, whether through skill as hostess or grace as guest, and when the dueling patronesses chose me as their portrait-maker, no gender bar could hold me back. My sex may even have been to my advantage. What man became painter to the French monarch before the age of thirty?

Nothing could ever compare to the France of my youth, but I have been swept into the courts of nations. Marie Antoinette was the first queen to pose for me, but I went on to paint the royalty of Naples, Sardinia, Prussia, Austria, England, and Russia. It’s true! Within ten years, fate had thrown me from the court of Marie Antoinette to that of Catherine the Great. It is a story perhaps too large for the fragile words I can summon. My paintbrush always could bear the weight that would break my pen. For the moment, I will say only that I speak with authority on the social affairs of Europe.

I loved nothing more than to throw a successful party. I’m embarrassed to tell you how proud I was when I discovered Italians had heard of my Grecian dinner spectacle. It is undoubtedly true, however, that any successful affair is an enormous amount of work. Some find it a creative endeavor, while some find it an energy-draining chore. Regardless of how one feels about it, to dedicate your time, creativity and energy to planning a party for someone is a gift. A gift is something that is given freely by the giver and received with gratitude by the recipient. When a gift is demanded, it ceases to be a gift.

I do not believe it is a question of aging out of the right to parties planned by others. I believe it is a question of aging into empathy. It is natural for a child to be oblivious to the work of throwing a party, but surely a grown adult, able to move through the world and grasping the concepts of time and cause and effect, becomes uncomfortable with allowing those closest to them to expend so much energy every year. This feels more true if they do not expend the same energy on the host’s birthday, but I fear that comparing energy spent will lead us down a murky path. For now, let us say that adults should treat with tenderness what they freely demanded from family as children.

My suggestion for breaking the cycle is speak, but speak with the assumption of best intentions. Assume that they simply do not know they are imposing. They may genuinely feel that you have been giving an unprompted gift every year, regardless of the weight of obligation you are feeling. For example, do not tell the celebrant that you resent every party you’ve ever planned. Do tell them that you are looking forward to seeing what they would like to plan for their birthday this year. If you must make an excuse, you may certainly say that you have exhausted your ideas or that you are worried you won’t have the time this year for the planning a party deserves. But you must state clearly and well in advance that you will not be planning the party this year. If you hold firm, you will find this one time may break the cycle to pieces.

In the meantime, do know that morality and etiquette are on your side. It is one thing for a Queen to demand her subjects plan an extravaganza for her. It is quite another thing to demand a gala from those we love.

Badass Tip Jar
Born in 1755 in Paris to minor painter, Louis Vigee. Died peacefully at age 87 in 1842 in Paris and buried under a stone that reads “Here, at last, I rest.” After her father’s death when she was twelve, Louise Élisabeth Vigée Le Brun began to paint to support the family. She was so successful that by age 24, she was painting Marie Antoinette, whom she adored. When the Revolution started, Vigée fled to France with her beloved daughter, leaving behind a husband who was eventually forced to divorce her for abandonment. After twelve years wandering Europe supported only by her painting, she was granted permission to return to France, where she was viewed with suspicion. Her memoirs are laced with longing for a France that had disappeared almost fifty years before.

FOR INFORMATION ABOUT THE HUGE MET EXHIBIT SHOWING THROUGH MAY 15, CHECK OUT: HTTP://WWW.METMUSEUM.ORG/EXHIBITIONS/LISTINGS/2016/VIGEE-LE-BRUN