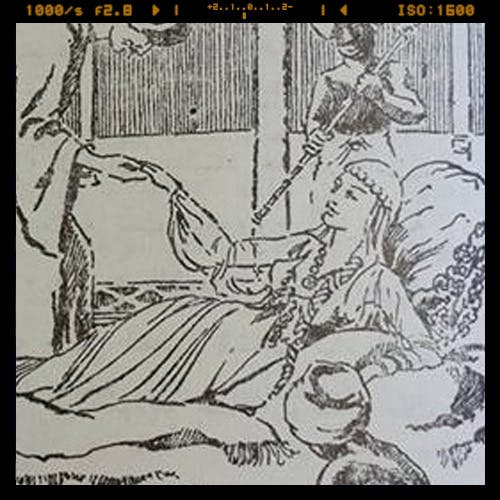 What do I say when I’m out shopping and salesgirls are rude to me about my figure? Sometimes, it’s subtle, like a raised eyebrow or saying they don’t have anything in my size. Sometimes they’re just plain rude, like telling me to shop somewhere else. I was out with a friend the other day and this woman grabbed a dress out of my hands and said I’d rip it. I was bringing it to my friend in the dressing room!

I work so hard to love myself and be happy in my own skin, but something like that happens and I feel like a kid being bullied all over again. I’m so humiliated and it’s like all the work I’ve done doesn’t mean anything.

What is happening in these moments is not that they are humiliating you; they are embarrassing themselves. You should react accordingly

When someone reduces you to a physical characteristic, they reveal their own limitations. When I was brought to the new Sultan’s court, the women of the house dismissed me, as did their partisans. I was a foreign slave, so I could obviously be no threat to them. I believe some of them didn’t see me as a threat until the moment I became Sultana.

I didn’t realize how much I’d learned from them until the darkest hour of my adopted land. The French King wrote to my Sultan to brag that he was coming at the head of a massive army. The French king asked nothing, but warned my husband of his oncoming death. He didn’t know his letter was to a man already dying.

In those terrible days when I was seeing the end of my husband’s life and all the chaos that the crusading army would trail in their wake, I realized one crucial thing. I was being underestimated. The vultures circling the death of the Sultan would never think that I could seize power for myself. I was a woman, after all, a Turkic one at that. And the crusaders would expect no military strategy from us. They thought us so weak and unskilled that they could warn us of their advance and still find us powerless to stop them.

When my Ayyub died, I hid his body and permitted no one access to the Sultan. My armies – yes, they were now my armies – laid a trap for the crusaders. We gave them easy skirmishes and led them towards unguarded towns. While part of the army ambushed the crusaders in those towns, the other part ambushed the waiting ships. We destroyed their fleet with fire and captured the French king.

The man who threatened to destroy my husband paid me dearly for his freedom.

I suggest that you foster a healthy sense of pity, alongside that self-worth. You don’t need to care for the people who misread you or educate them. You can, however, pity the blindness that may someday cost them as dearly as it cost the French king.

Born presumably sometime before 1328 somewhere in what is now Turkey or Armenia. Killed 28 April 1357, in some stories beaten to death with clogs by slaves in the presence of the new Sultan and his mother, in retaliation for arranging the murder of her second husband. While her rise to power is largely unknown, when she became Sultana of Egypt, she was only the second Muslim woman to rule in her own name. Her successes against the Crusade and the first male claimant to the throne in Cairo were not enough to pacify parts of the empire that objected to a female ruler. She attempted to allay these fears by marrying a puppet and ruling through him, but when he got other ideas and she arranged his murder, it started a coup that resulted in her death.

For more about Shajar, check out Rejected Princesses!