Not Jealous Just Pissed, answered by Philippa of Hainault 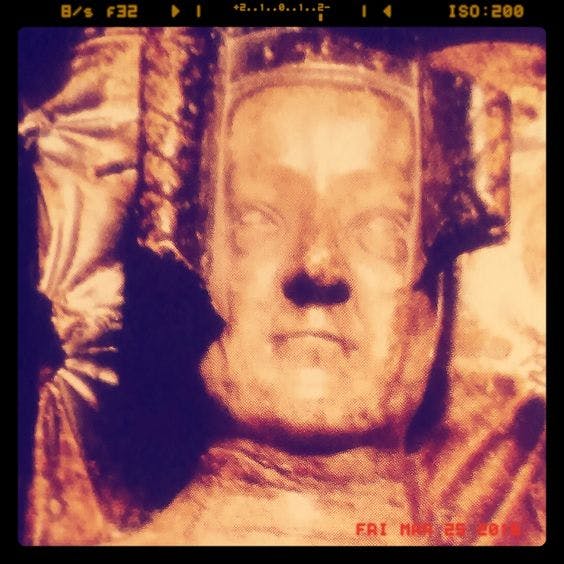 My sister has always been gorgeous and mean. My friends and my pastor always said that good behavior is eventually rewarded, but we’re in our thirties and my sister has everything.  She and her husband have a huge house while my husband and I are stuck renting a tiny apartment. They travel everywhere and we use our limited vacation to go see our parents.  Her Facebook is full of parties and social outings, but she’s just as mean-spirited as when we were kids.  When will I finally be rewarded for being a good person?  When will she be punished?

My eldest sister Margaret was stunning, a combination of beauty, brains and poise not seen since Eleanor of Aquitaine.  She was only a year older than me, but I could never catch up to her.  I felt destined to always be her shadow, to wait on her as an old maid when she married a handsome king. When Prince Edward of England took refuge with my father, everyone thought he would marry Margaret.  I thought so too, but I couldn’t help falling in love with him the second I saw him.  He was handsome and thoughtful and commanding.  You knew instinctively he would protect his loved ones like a lion.

We married at York, standing in the church door because the whole city turned out to welcome us.  Edward was a good king, strong and successful, but he always listened to me.  The strength of our trust saved the lives of the leaders of Calais and supported Geoffrey Chaucer, a poet they still read today.  Edward and I had many children and grandchildren. There wasn’t a woman in Europe, no matter how beautiful, who didn’t envy me, plain and plump though I was. I lead a blessed life.

My daughter Joan was one of the first English victims of the Black Death.  More than a third of our subjects died within a couple years.  Whole villages were left to the dead and no one knows why.  Maybe God’s judgment or an ill-conjunction in the heavens.  Because we didn’t know what caused it, we never felt safe.  We didn’t know why it spared who it spared the first time and every time it came back, we feared the world would end.

I lived for my children, but I couldn’t save them.  William Hatfield, Blanche, Thomas, William and Joan all died as infants.  Mary and Margaret died in the same season, both newlywed teenagers.  Lionel, my favorite son, fell ill suddenly fetching his Italian bride.  I never even saw his grave.

I was the luckiest woman in Europe, married to a wise and handsome man who was devoted to me and protected me.  I had every material wish answered for, from jewels to sumptuous foods to decadent clothing.  I had the children I’d always wished for.  I’d always envied my sister growing up, but by the time I was fifteen, the known world envied me.  And I died with a heart scarred and half-healed.

It is easy and human to envy someone who seems to have everything, but the simple truth is that not only have you no idea what lies inside their heart, you have no idea what lies in their future.  It is our nature to experience ecstasy and despair and our character lies in how we navigate them.  It is a waste of our limited time and energy to be jealous of someone at the peak of Fortune, because her wheel is always turning.  Focus on savoring your own blessings and cease to envy what you know to be a temporary situation for another.

Born in 1314 at Valceinnes to Count William “The Good” of Hainault and Joan of Valois.  Died at Windsor Castle in 1369 of “dropsy” during a country-wide recurrence of the bubonic plague.  Philippa met the teenage Edward when they sought aid from Hainault in the revolt against his father and married him as soon as he was settled on the throne.  Unusually for the middle ages, they lived and traveled together as much as possible and Edward appears to have been faithful until Philippa was near the end of her life.  Beloved by all of England, she is perhaps best remembered for publicly pleading with her husband to spare the lives of the burghers of Calais after the siege of Calais in the 100 years war.  This moment was sculpted by Rodin and dramatized by Shakespeare.  She had fourteen children by Edward III and outlived nine of them.

FOR AN INTERESTING THEORY ON HER AFRICAN ORIGINS, CHECK OUT ERIN LAWLESS.