Not a Show-Off, answered by Nzinga of Ndongo and Matamba 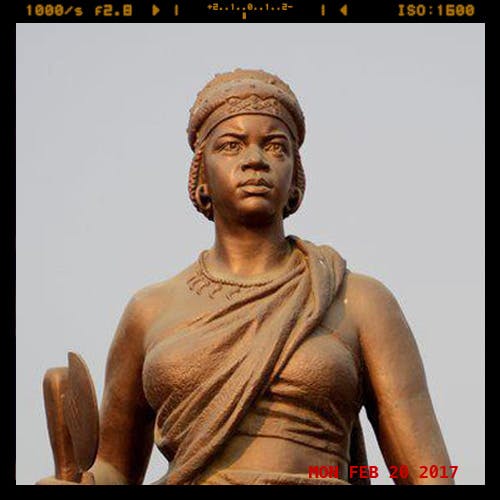 So I know there’s bigger stuff happening right now, but I need help with my career. I’m a theater director and I’m at the building stage. I have some theater experience and some life experience, but I’m still at the point where so much of what I have to do is networking and interviews. Interviews for fellowships, interviews to assist, interviews to direct shows. I keep getting passed over for people who seem really braggy to me. It just seems like they’re always pitching themselves.

That is not me. I’m from the Midwest and where I grew up, if you actually have it you don’t have to tell people about it. I’d feel fake and gross talking the way they do, but it seems to be working! Part of me wants me to be myself, either succeed or fail as me. Part of me just really wants these opportunities and doesn’t care how I get them. What should I do?

Dear Not a Show-off,

You seem to think that modesty is an immutable part of you, like your sex or the color of your skin. I would argue it is a tactic, one that served you well in the place where you were born, but has proved ineffective in the place you now live. Your question reflects no doubt in your own deserving, merely in how that deserving is communicated. You want the demure assurance you learned as a girl to be successful in your life as a woman. Now that you see it is not, you can change your tactics or your environment. The choice is yours.

My father schooled me well in diplomacy and tactics. He had inherited from his father and his father’s father not only a nation-state consolidated from previously fractious peoples, but the wisdom that made the consolidation possible. I do not know if his teachings were to arm me for the life that the daughter of a low-status wife could expect after his death, or if he knew that the son of his high-status wife would prove incapable of rule. (The Ngola had multiple wives and only the children of the high status wife could inherit.) My father taught me that men respect strength, not honesty. He shaped my personal strength to be my shield, no matter how many spears were raised against me.

The first was in the hand of my half-brother. When my father died, Mbandi bathed his coronation in the blood of my family. I escaped, but my plans to build an army of vengeance were interrupted by his incompetence. My father had kept the growing colony of Portuguese slavers at bay through a combination of strength and calculated gratification. My half-brother’s attempt to buy their allegiance with supplication and bribes was taken as an invitation to invade. My brother ran away from Kabasa, our beautiful capital city of 50,000 souls.

I convinced my brother that he should send me as an envoy to the Portuguese. When I arrived, they thought to humble me by offering me a grass mat to kneel on instead of a chair. In silence, I looked to my keenest servant, who knelt on the grass mat and offered her back to me as a chair. I sat, looked the governor squarely in the eye, and negotiated the freedom of my people. When I returned to Kabasa, I took leadership of my people and allowed my brother to die by his own hand. I spent four decades maintaining the sovereignty of my people, both those I was born into and those I brought under my wings. When battle came, I led my people from the front, so that even in times of peace, my shadow would cast a chill across the Portuguese colony.

People are greedy. My half-brother knew how much I had to claim vengeance for, but he could not resist allying with me when I seemed his best way to get back his throne. I convinced him that I cared more about protecting our people from the Portuguese than I cared about our wrongs. It was true, right until the point that I could avenge myself while serving our people. Everyone you encounter will not have my brother’s cupidity, but you should seek the places your interests align and work from there.

People will seek strength, especially in times of turmoil and in uncertain endeavors. To be an artist now is to be in both. You don’t have to enter every conversation as if you are selling yourself, but you do need to stand in the strength of your accomplishments and your potential. To do anything short of that is to ask others to believe in you more than you seem to.

Nzinga of Ndongo and Matamb

Born around 1582 to Guenguela Cakombe and Ngola Kiluajni of Ndongo, in present-day Angola. Died peacefully on December 17, 1663 as the 81 year-old Queen of Ndongo and Matamba. After Nzinga took power, she surrounded herself with a core of powerful women and eventually either destroyed or subverted neighboring hostile powers, including formally annexing Matamba. When the succeeding Portuguese governors rejected her treaty, she led armies into successful pitched battles against the colony. In 1656, King Pedro VI of Portugal formally renounced all claims to Ndongo, giving Nzinga seven years of peace before her death.

Office of Badassery note: Nzinga was a master cultural code-switcher. She was able to lead several hostile groups by speaking to their values. During her Portuguese embassy, she was baptized with the governor’s wife as her godmother! Here, Nzinga is using terms like “souls” and “colony” that might not have been in the lexicon of her contemporaries.

Nzinga’s story has more nuances, battles, and alliances than can be covered in this column, as well as contradictory sources giving rise to different stories. For three such bios check out: