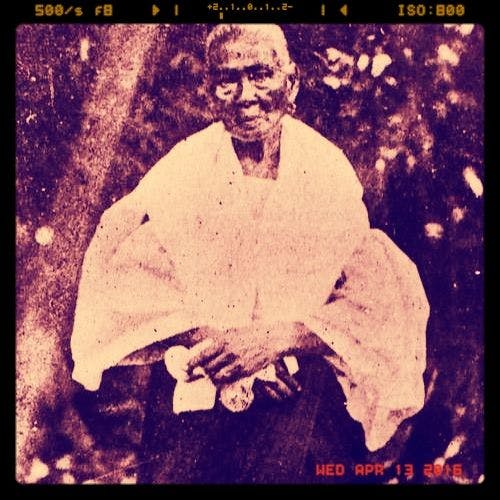 There’s no such a thing as being too old to get a tattoo, but there is such a thing as being too old to need one.  I’m not anti-tattoo – just the opposite.  For millennia my people used tattoos to denote tribe and class, accomplishments and status, spiritual protection and charms, and yes, sometimes, just to beautify ourselves.  The very lucky or very proud sometimes were covered across their entire bodies, with only the hands and feet excepted.  When the Spanish came, they tried to drive it out along with the diwatas, as if our spirits and our traditions were not a part of the very land they sought.  Despite the missionaries and the soldiers, our traditions survived, sometimes on the very remotest of highlands on the smallest of islands, waiting for us to drive the invaders out.

I waited my entire life in smothered ferocity to see the invaders leave.  I went to church, mothered my children and ran a shop.  My life was no different than thousands of others until after my eightieth year.  There was a fever in the land.  We were finally ready to join together to wash the invaders away in a great wave of patriotism.  I was too old to pick up a weapon, but I was also old enough to risk my life.  My children were grown with no need of my protection.  I housed the revolutionaries in my shop, helped light the Cry that sparked the country into flame, used my home as a wartime infirmary.  I was interrogated by the Guardia for information, but I didn’t break.  I expected to be shot, but they sent me into an exile instead.  I don’t think they could shoot a grandmother.  Or maybe they worried I’d be more powerful as a dead symbol.  I risked much in my age, but I think my age became my safety.  I even lived long enough to come back home.

I have seen the great arc of life, over one hundred years.  There is much I would tattoo onto my skin: my people, my battles, my guarding angel.  None of it would be dainty.  I wonder about that word you use, in the context of your question about age.  I wonder if you are thinking of a tattoo that is not protect your spirit or broadcast your victories, but to tell people what to think of you.  This is a battle that is lost before it is begun.

I wonder, given the age-based nature of your question, if you are at a cusp age, where one stage of your life transitions to another.  Maybe you are out of school and into a job.  Maybe you have moved from the life of single friends to a community of coupledom.  Maybe a responsibility has shifted and you find yourself carrying more weight than you previously did.  If that is so, your desire for a conspicuous, dainty tattoo may come from the pull of the part of your life you’re setting aside.

If you want to get a tattoo to mark a battle you won or invoke a shield for your spirit, do so with joy.  If you want to get a tattoo as a sign that you will not age, I am sorry to tell you that ink does not contain that power.  At least, not ink on skin.  Even the most beautiful skin will wrinkle and fuzz and the strongest body will eventually lean on canes.  Do not waste your energy fearing or fighting this.  Every breath, until your very last, has the power to ignite.  Do not waste them on worried words.  Your breath, like your skin, is meant to sing your strength.

Born in 1812 in Balintawak into a poor family.  Died at the age of 107 in her daughter’s home in what is now Quezon City.  She married the son of a more prosperous family and had six children whom she raised by herself after her husband died, in addition to running the business her husband left behind.  When she was 84 and the Philippines revolted against Spain, she opened her store to the revolutionaries, tending to the sick and giving them refuge and provisions.  She became known as Tandang Sora, a nickname that referred to her age, and withstood Spanish jail and exile rather than betray the cause.  Today she is known as the “Mother of Philippine Revolution”.

TO LEARN MORE ABOUT TANDANG SORA, CHECK OUT FILIPIKNOW.