Stuck in a Grudge, answered by Margaret of Anjou 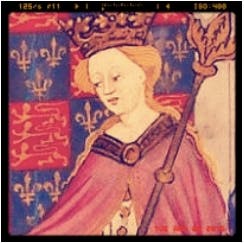 My best friend dumped me for nothing.  She was going through some stuff and I was supporting her and then suddenly she was being really rude and spreading vile rumors about me.  It’s been long enough that I can sorta put it in perspective.  I saw her really vulnerable and I think she couldn’t stand anyone seeing her that way.  The thing is, even though I can understand it, I can’t forgive her.  I’m still angry.  I think about it all the time.  She’s nowhere near me and we don’t even have any friends in common.  But I can’t seem to stop being furious with her.  How do I stop feeling so angry?

Stuck in a Grudge

Your experience is familiar to women throughout history.  No matter our country or class, betrayal is grafted to our bodies with links of rage and resentment.  That your experience is common may not sound as comfort, but it’s meant as one.

I, myself, always needed to be extraordinary.  I hated the intimation that I was just another pretty daughter of a bankrupt noble hanging around the Prince.  Before I ever met the Pucelle or Suffolk or York, I knew I had to live a life of legend.  So of course, when I fell in love, it was the love that makes troubadors wander the world to sing of it.  It was the love that sweeps up countries and crowns in its tide.  It was the love that makes an young girl forget to breathe, give her body and soul to the keeping of another, believe that together they are invincible as the depth of the sea.

I have no words for the discovery of his death.  Even now, those days are half-remembered moments, waterstained and torn.  I remember the pain of breathing in, my throat clenched so tight I could swallow nothing.  My torso, not just chest but liver, gut and groin ached so badly I would press myself between the bed and the floor.  I waited for the pain to kill me.  I couldn’t imagine living another minute like that, much less the rest of my lifetime.

I gave birth to his son in silence, hoping to join him after.  When the storm was over and I still lived, I stared at the son in my arms.  At first, I thought about all I never got to tell my love.  I never got to see my his face light with fatherhood – not even impending fatherhood.  He was killed before I knew to tell him.  Then the baby’s heart beat against my ribs and I finally felt my heart begin beat again.  It became a bellows, whipping my sorrow into flame.  No more tears now.  I would think upon revenge.

I destroyed my enemy and was destroyed in turn.  I killed his son and wiped his face in his son’s blood.  I tortured him and posted his severed head above his gate.  Years later, his sons killed my son and husband.  I went from queen to prisoner, but I waited to see my enemy’s family fall.  They did, in the course of time, eaten by their own.  Fortune is a Fury in her wrath.  But their suffering did not unburden mine.  I found myself reviewing my losses like beads on a rosary, repeating them again and again and again, my bitterness only growing.

One day, I saw the newly made widow and her mother-in-law – the widow of my long dead foe – weeping.  I sat with them to remind them of my losses and ended up hearing theirs.  My life and griefs were extraordinary, but other women had born the unbearable through these wars.  For a moment I joined a sisterhood of mourning.  When I stood, I found my heart was the weight it had been when I was a girl.  It was still crisscrossed with scars, the heart of a woman who had lost much.  But it no longer carried the burden of my rage, so many years unabated.

I do not know how one forgives.  Forgiveness found me, entirely without my choosing.  The sweep of my life contained so much I could not control.  Each choice led inexorably into the next.  I wish I had known that nothing would ever heal Suffolk’s death.  There is no vengeance for a loss so deep.

I do know the cost of hoarding our grievances to our chest.  It was not until that day, leaving my losses in the English earth, that I recovered my memories of our love.  For so long, memories of my Suffolk had been salt tears in an open wound.  I thought of him only as a shattering grief, the loss that defined my life.  I had forgotten the thrill of being loved by him, the way his eyes seemed to encompass the whole world, the way he made me think in poetry and speak with my body.  I did have the epic love I’d promised myself as a child.  But I didn’t reclaim the memories of it until I was an old woman.

I do not know how you can forgive, but I think you must practice.  I lay down my rage when I saw not the evil scorpions of a cursed family, but mothers who, like me, had lost their sons and husbands.  My enemies became my reflection. You say that you saw your friend vulnerable.  Can you remember that side of her when rage fires you?  Nothing that happens to her, nothing she could say to you, will undo the hurt she inflicted.  That means the story is over.  Your rage, in part, is a desire for retribution and restitution.  Once you accept that those are illusions, it should be easier to pity a woman who lost a friend through her own confusion.  I hope you can make this into a constant practice.  A smoldering grudge is an unhilted knife, wounding both bearer and victim.

Born in 1430 in Lorraine to “Good King Rene”, the Duke of Anjou and the titular King of Naples, Sicily and Jerusalem.  Died in 1482 in Anjou, after her father sold those titles to ransom her from the English.  Margaret married King Henry VI of England as part of one of the many treaties that attempted to end the Hundred Years War between France and England.  The Duke of York rebelled against Henry VI, kicking off the civil war now known as the War of the Roses.  Margaret became the leader of the Lancastrian side on behalf of her son and didn’t stop campaigning until her son was killed at the Battle of Tewksbury.  She plays a major role in Shakespeare’s Henry VI, Parts 1, 2, and 3 and Richard III and is one of the few female characters in the classical cannon whose life is depicted from youth to old age.