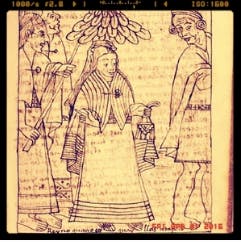 How does one rectify being a woman but wanting more than what the average woman is valued as in society? For example, I would like to scratch my genitals whenever and wherever without anyone blinking an eye, or sexually harass the hell out of random men on the street or in the office because I don’t have a filter.

Your question is one of roles and responsibilities. What do we owe each other and what is unreasonable for the group to ask – especially in light of what the group will do for you? You are concerned about social niceties, but they are niceties that you give without receiving. I wonder if you would be eager to make comments to strangers if you were not commented on by strangers. A social pact only honored by one side festers as an unequal bargain.

My people know about our duty to each other. Our spectacular mountains are fertile but devastating. To make our home in their peaks is to ride the puma. There is power but the ever-present threat that it may turn on us with claws and teeth. It takes a communal will to survive in this place, much less build an empire that stretches from the sea of ice to the sands of summer. Even our treasures glorify the work of many. The poorest among us carries his burden in complex textiles whose wool is made from the herds of men and the spindle and loom of women. When the Inca presents himself to his ancestor in the sky, he reflects the light from a thousand leaves of gold, mined and carved for his body. Our roads and the messengers stationed upon them are so fast that the fish I eat for dinner in our perch near the sun awoke in the distant sea.

We conquered this volcanic world through what we are to each other. There is Ayni, what we owe each other. I will help build your new house because you will help me repair my terrace. There is Mita, what I owe my community. We all benefit from the roads that connect us to the known world, so we all must maintain them. Last, there is Minka, what we owe to the world of the spirits, the Apu, the Sun, and his descendant, the Inca. When I married Yupanki, he whispered a secret from his father who’d been long on the throne. The Minka has a mirror image. We must care for those who offer this tribute. He fears that when we forget this we will be a prey to our enemies.

Your question speaks to this balance – rather it speaks to the absence of it. I would encourage you to assert it, at least in your life. Feel yourself bound only by those behaviors that you want to receive in turn, ignore those rules that apply only to yourself, and call out any unequal bargain. I assume this means feeling free to scratch yourself whenever you feel like it, saying nothing to strangers and calling out men who do. Your concern is not about your place as a woman, but feeling compelled into an unequal duty. If no one is honoring an agreement but you, is it really an agreement?

Likely born in Cuzco, the center of the world, presumably at least a decade or two after her brother and future husband, who fathered her son around age 65 in 1476. Died, presumably in Cuzco or Machu Picchu, shortly after after seeing her sixteen year-old son settled securely on the throne as the eleventh Inca in 1492. Mama Ocllo was named after the legendary mother of all Inca people and founder of Cuzco and like her namesake, she was powerful and clever. In one story, her strategy conquered a territory her husband’s army could not. When her husband died leaving many heirs, she navigated her teenage son onto the throne to rule the largest empire in the known world.

To see an early Peruvian chronicle of the Inca, check out Det Kongelige Bibliotek.