Breaking Up with Home, answered by Joan la Pucelle 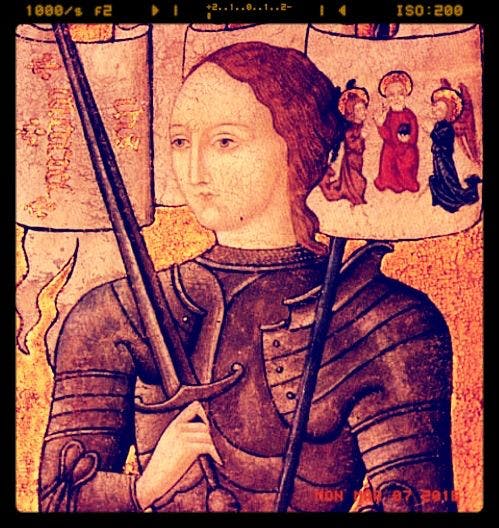 I broke up with my boyfriend of three years a couple months ago.  It sucked and I started fooling around with job applications out of state, mostly as an escape.  Well, I got an offer.  It’s a city I’ve always wanted to see.  The pay’s okay, but not great.  More ramen than restaurants.  The thing is, I’ve never lived anywhere else.  I have a really close family and friends since elementary school.  They’re all worried about me making such a big decision in the midst of a breakup, especially since I’d be moving from a pretty safe, quiet town to a big city where I don’t know anyone.  Are they right?  Am I overreacting to a breakup?  Should I stay safe with the people that love me rather than risk a strange place I might not be able to handle?

THINKING OF BREAKING UP WITH HOME TOO

The instinct to seek what is safe is inborn.  It is as if the Lord gave us the instinct to balance the fact that He created a world full of danger.  What He did not give us was the innate knowledge of what is safe and what is a risk.  Where I grew up, no one travelled farther than the next village in their entire life – and I don’t mean Donremy, I mean medieval France.  The nobles would move around the country, of course, and some of the men even fought abroad, but working people, the people who farmed and worked the vineyards and created the wealth that made France a jewel to be fought over, we would work, marry and die within five miles of where we were born.  Especially women.  We depended on the men of our community to keep us safe.  It wasn’t just relying on our brothers and fathers to physically defend us; if we were robbed or attacked, we couldn’t bring charges against those who attacked us.  We were respected only as the property of someone else.  If we travelled by ourselves, we told any man we happened to run across that he could hurt us with impunity.

And yet.  When I left Donremy, it was in the middle of a war zone.  It had been in the middle of a war zone my whole life and, with varying intensity, through my mother’s life as well.  It wasn’t just the English, the Burgundians, the Armignacs, and the French armies that robbed and raped the peasants as they passed.  Every one of the English attacks over the past hundred years had left hundreds or thousands of soldiers to wander around France, pillaging through the unprotected countryside, even during times of peace.  Our brothers, fathers, townsmen couldn’t protect us.  Every single woman I grew up with was terrified of leaving Donremy, but in Donremy we were dragged from our burning homes by our hair and brutalized by entire companies of – well, the Father may call them human but I cannot.  What could I possibly fear outside of Donremy compared to what was in it?

I don’t fault your urge to seek safety, but I question your definition of it.  I urge you to question it.  Is it safer to stay where you are and risk a lifetime of unanswered questions?  Or is it safer to risk failing?  Only you know what is the greater fear, but that’s my point.  Only you – not your family or your friends – know what you fear and what you risk by staying put or moving.  Chose your safety, not theirs.

Born 1412 in Domremy, on a French farm.  Burnt at the stake as a heretic in Rouen in 1431.  Joan of Arc became a national hero when she lead the French army to important victories against the English during the Hundred Years War, even getting the Dauphin crowned at Reims Cathedral.  She was captured and turned over to an ecclesiastical trial run by pro-English clerics.  Despite her adept handling of her questioning, she was sentenced as a heretic for wearing men’s clothes.  Her body was burnt twice and her ashes scattered into the Seine to prevent any (French) witnesses from saving any piece of her as a relic.

TO LEARN MORE ABOUT HISTORICAL JOAN OF ARC, CHECK OUT THE HISTORY CHICKS.

TO LEARN MORE ABOUT THE CHARACTER JOAN LA PUCELLE, CHECK OUT MARGARET I.