Embarrassed By My Sister, answered by Empress Matilda 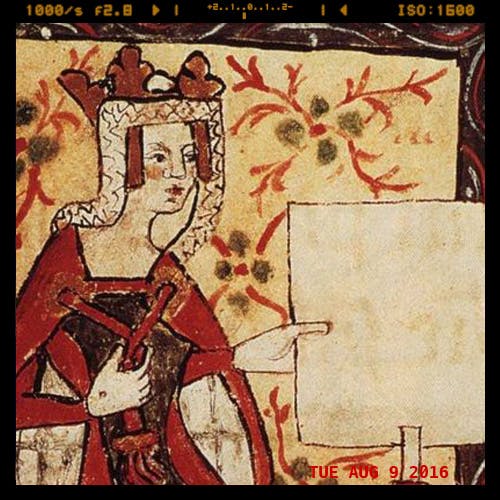 My sister humiliated me in front of the entire family.  She was the maid of honor at my cousin’s wedding and for her toast, she told a secret that I had shared with her.  My cousin looked good in the story, but I looked ridiculous – she even exaggerated for laughs and there were plenty.  She refuses to apologize.  She says I’m just being dramatic.  The worst thing is my mom is siding with her.  I don’t live at home, but I can’t just never speak to either of them again.  Can I?

Embarrassed by My Sister

You have the entirety of my sympathy.  Families are like royal courts: they magnify every interaction and leave us vulnerable to the whims of someone else.

My father was an absolute despot, both literally and figuratively.  Having seized the crown under shadow of suspicion, he allowed no one to question him, be they family or vassal.  As a child of ten years, I was sent to wed the Holy Roman Emperor to give my father a momentary advantage.  When I was widowed at twenty-three, he summoned me back to a country I barely remembered to make me his heir, crushing every objection his barons raised with brute threat. He forced me into a second marriage with an arrogant teenager in the hopes that my new husband would secure our French lands and I would bear a son that could inherit directly from him.  When my new husband beat me and I left, my father forced me to return to him.

For all his talk of my fitness to rule his kingdom, he never even let me rule my own body.  With each betrayal, the distance between us grew.  I loved my father, but to my shame, I would imagine the day when he was dead and I was finally free.  Instead, my father’s death brought more familial betrayal.  My cousin stole my crown with the direct support of his family. One by one, my half-brothers, cousins and kin pledged their support to the usurper.

The treachery of the graspers like the Beaumonts was unsurprising.  Every court in the world has men who will betray the laws of God and the morals of men for the slightest hint of advantage.  The betrayals of family, however, cut me to the core.  I don’t know if I ever fully healed.  One expects to be safe with family, you see, so a family member turning sets the heart upon the rack.

I found it very hard to forgive.  In the face of helplessness, my only defense was my pride.  At least, it felt like a defense.  I later came to see that while my pride may have protected my spirit, it limited my actions.  If I had been more forgiving, maybe Stephen’s supporters would have defected sooner, maybe I wouldn’t have tried to punish London or attack Wincester.  I thought I had to vanquish all disrespect, but if I hadn’t, I might have been crowned.

You have two issues.  Your pride has been wounded and you feel your sister betrayed you.  I would suggest examining your pride.  What is it guarding you from?  Do you need it in your family circle?  Is it protecting you from a malicious person or magnifying a thoughtless gesture?  Only you know for sure, but I hope you will consider where the voice of pride leads you.  Sometimes a family environment is so treacherous that pride is a necessary shield.  More often, it just serves to undermine the bulwark of the family.

As for the betrayal you feel at your sister publicly sharing your secret, you can turn this to a lesson instead of a grudge.  That she repeated an embarrassing story is unfortunate.  That she does not acknowledge your pain over it is a more weighted dispatch.  By your report, she does not understand your indignation which, if true, means her goal was not to hurt you.  Her dismissal of your feelings, however, tells you how willing she is to substitute her judgement for yours, even regarding your feelings and secrets.  She will always be your sister, and certainly this embarrassment is not grounds for total estrangement.  You should, however, be wary of making her your confidant.  She has told you by her actions that your secrets are not safe with her.  Going forward, you should moderate your conversations accordingly.

That our families are made of imperfect people does not mean we should forever eschew their embrace.  I learned through bitter experience that we must accept their flawed selves, in the hope that they will offer us the same.

Born in 1102, possibly on February 7 in the Oxfordshire village of Sutton Courtenay, to the recently married and crowned Henry I of England and Matilda of Scotland.  Died in Rouen on September 10, 1167 and buried at the Abbey of Bec under the inscription “Great by birth, greater by marriage, greatest in her offspring: here lies Matilda, the daughter, wife, and mother of Henry”.  Her father married her to Henry V, Holy Roman Emperor, when she was 12.  When her husband died nine years later and the death of her only brother deprived her father of a legitimate son to inherit, Henry I recalled her to England, forced her to marry Geoffrey of Anjou, and forced the English and Norman barons to give their oath to support her as the lawful heir.  When Henry I died, his nephew Stephen seized the throne, kicking off a twenty year civil war known by the names “The Anarchy” or “When Christ And His Saints Slept”.   Matlida’s fight to reclaim her throne failed, but it secured the throne for her eldest son, Henry II, who was to become one of England’s greatest medieval kings.

For more on Matilda, check out Medieval Life and Times.