Am I Just Waving a Sign?, answered by Eleanor of Woodstock 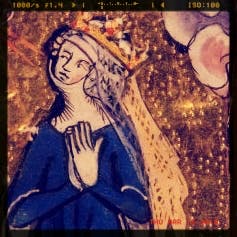 How do you get attention for a worthy cause? There are so many people protesting so many things right now, it’s hard to break through the clamor. It seems like the student walkouts in America are having an effect on gun control. But why is this protest getting more attention than others? My friends and I are trying to raise awareness about a local issue that should be so easy to argue for, except no one’s paying attention. How do we make them?

You face the overwhelming ease of communication, a world in which everyone has access to a megaphone. I faced the opposite, a world in which the international power politics that swept through my adopted duchy of Guelders were determined by coteries that communicated via ambassadors and letters that took weeks to arrive. Like you, however, I had to force my audience to listen.

My husband had seized power while his father was still alive by fomenting factions in his father’s court. I did not fear him when we married because I saw my mother do the same on behalf of my brother. Both of our fathers had died imprisoned in the name of their son. My brother had grown into a competent, steady king and I thought my husband had done the same.

I’d like to say I thought that right up until the moment he expelled me from court, but I had excused away warning signs. I attributed his changeability to the task of keeping on the right side of my brother and the King of France. I attributed his constant warring to the precarious position of Guelders. I attributed the ease with which he destroyed trusted councillors to the exigencies of rule.

He told the court I had leprosy and confined me to my quarters. He was preparing to divorce me, severing me from my sons and England from its vital continental alliance. Leprosy was a terrifying disease and many in my time believed God would only allow it as a punishment for those who held some secret sin. The rumor, spread by diplomat and courier to the far reaches of Europe, would justify him and discredit not only me but also my brother and the English throne.

I did something shocking. I walked into his court, in front of his supporters and attendant diplomats, and removed my clothing. Not even my husband had ever seen me so naked before. It was unheard of, beyond scandalous. The story would travel to the farthest reaches of Europe. But it also proved beyond the shadow of any whisper that I was uninfected. My husband was forced to restore me to court and I was able to raise my sons to manhood.

You need to find an act that breaks a social rule, but also encapsulates your issue. There is power in a singular transgression. Not only would my stunt have never worked a second time, it wouldn’t have worked if I hadn’t had a reputation for propriety. Find something unique you and your friends can do and make sure as many powerful people as possible hear about it. From there, you should be able to pursue your campaign, so make sure you have your next steps in place. You won’t get a second chance to be transgressive.

Be bold and do not let the social rules stop you. The sound of them breaking will draw the eyes of all.