Bothered on the Train, answered by Eleanor Cobham 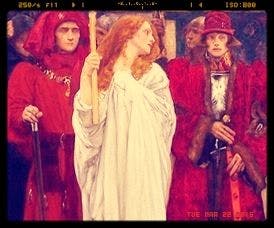 How can I get people to stop touching me or talking to me on the subway?

Bothered on the Train

I wish I didn’t understand your question so clearly.  I also wish you had written in more detail.  Men reading your question will be slightly confused and say, “you ask them to stop or you move.”  Problem solved.  What you and I understand is that your question is not about the biannual irritant of a drunk wanting conversation on the train, but the daily experience of women in the public space.

I saw this from every level of society.  I was born the daughter of a simple country knight, with just enough status to know how much was above me.  I schemed my way into a duchess’ entourage and seduced the duke.  When he became the most powerful man in the land, I became the most treasured woman.  When his power weakened, his enemies struck at him through me and I was convicted of witchcraft.  Part of my punishment was to walk through the slums of London, barefoot and dressed as only my husband had seen me before.

The crowd had been ordered not to molest me and I was accompanied by the king’s guard, though they felt dangerously far behind me.  I was fairly certain I was safe from physical harm, short of a sudden riot, but I was not safe from their words.  The jeers and insults, all explicit in nature, were of course painful, especially for a woman who’d been treated with deference for years.  The attitude behind the words, however, wasn’t a shock, or even a surprise.

Even when I was at the height of my power, or rather, when my husband was at the height of his, the men at court treated me as an object.  An object to show respect to, but only as a means of respecting my husband.  I was a jumped up mistress made good, certainly not capable of understanding, much less cataloguing the slights at dinner, the veiled assumptions of my worth.  The words tossed at me on the street were only making explicit – in every sense of the word – the subtext of all my interactions with the leaders of the country.  Women were public property, to be looked at and limited, respected only to the extent the men around us protected us.  If we ever place a toe across that line, there is someone barking to scare us back to a cloistered protection.

There are two things that keep us silent, in the face of the barking dog.  One is physical safety.  If you feel that the man talking to you or trying to touch you poses a physical threat, please remove yourself from the situation.  It is better to wait for another train, even in the depths of the night, than to risk yourself.  The other, however, is embarrassment.  If anyone should be embarrassed, it’s a man so lacking in strength that the only power he feels is by giving unwanted attention to women he knows won’t fight back.  In that case, I highly encourage you to remove his leverage.  You would be amazed the power of a brisk, firm command, said at a volume to draw in others as witness.

If I may add one more thought, from the long sweep of my Manx imprisonment.  My Humphrey was a good man, but I never told him of the slights.  I schemed to put him on the throne, but told him only of disrespect to him, not my daily portion.  We don’t.  We tell ourselves we don’t want to needlessly upset our friends, family or lovers with the knowledge of how strangers speak to us.  But the result is men who do not understand the depth of the problem, because they don’t know how their dear ones are treated when they aren’t present.  Maybe our destiny would’ve been the same, but maybe my Humphrey would’ve seen the threat, if I’d told him of his peers’ treatment of me.

However you chose to navigate your life, I hope you will not let the actions of others affect your inner being.  As someone who has seen the full sweep of Fortune’s wheel, I can tell you that the details of each day will fade into oblivion, but how you treat yourself is a daily addition or subtraction to the only thing you carry with you into the fire.

Born around 1400 to Sir Reginald Cobham, likely at Sterborough in Kent.  Died in 1452 at Beaumaris in Wales, imprisoned in penury and obscurity.  In her early 20s, Eleanor entered the service of Countess Jacqueline of Hainaut, who shortly after married Humphrey of Gloucester, uncle of England’s child king and one of the most powerful men in England.  At some point, Eleanor became Humphrey’s mistress and, when Humphrey’s marriage was declared illegitimate by the Pope, she became his wife.  She was the most powerful woman in England, until she was accused and convicted of witchcraft.

TO  LEARN MORE ABOUT THE HISTORY OF ELEANOR, CHECK OUT THE AWESOME BLOG OF SUSAN HIGGINBOTHAM.

TO LEARN MORE ABOUT ELEANOR THE CHARACTER, CHECK OUT MARGARET I.