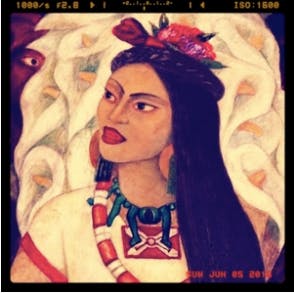 My ex-boyfriend screwed me over. Apparently, he was cheating on me the entire time we were together. He left me for the last one and left me in the lurch for our apartment. I had to cover rent and scramble to find a new place. He left me right when I was changing jobs and my mom was sick. I don’t know if he did it on purpose, but he broke my grandma’s vase when he was leaving. It’s been a month and I’m still so angry and hurt. His mom is really important to him and she would be furious if she knew about his cheating and the rest. Do I tell her?

Your question is one of vengeance, but I think you know this. The betrayed will often weave an elaborate cloak to dress revenge as something noble. You are clear-eyed enough to wrestle with the question of whether to hurt a man who has deeply hurt you.

This hunger for vengeance is native to all mankind. Perhaps the pride that demands it is a curse laid on us from some shadowy god. Perhaps it was a mislaid gift that we stumbled across. It certainly belongs to no other earthbound creature. Even the mightiest mountain cat or taloned eagle will, if wounded, escape to recover and continue its life while avoiding this newfound danger. Only man follows recovery with an immediate and unquenchable urge to seek out the source of pain and make it suffer in turn.

I crossed from the Aztec empire of the sun through the remains of the star-gazers’ empire in the mountains of the Maya. I was born the daughter of a ruler, but saw eight summers as a slave. I lived among men from the far side of the great beyond and even bore two of them children. Every human I encountered, of every land and class, will first bleed, then strike back.

When I met Cortés, I had spent years craving vengeance like water in the blazing desert. I was a small child when the men of the Hueyi Tlatoani killed my father for tribute. He was the sun to me, protecting me and guiding all of Paynala. I think he took my mother’s spirit with him to Mictlan, the place of death. Her body remained, but the joy that always decorated her face disappeared when he did.

I was still searching for my father in the sky when my mother married a violent man from the northern valley. He had little use for me as he consolidated his position as Cacique and even less when my mother gave him a son. According to custom, I was his heir – until the day my mother took me out of Paynala and handed me over to slave traders. I was passed from master to master through my young woman’s years, with all the terrified vulnerability such slavery implies.

I am so far from this time that I can see the events of my childhood like peaks of a mountain range, but I still cannot find peace with her. Maybe she feared her new husband would kill me himself and did it to protect me. Maybe she wanted to rid herself of every remnant of her previous life. Maybe she loved her son and not me. My life was like the ceremony we perform once a generation when our calendar ends. Every fire in the empire is extinguished and we wait in silence for the sky to fall. When it doesn’t, a man is sacrificed and a fire is lit in the center of his body. Torches lit from this fire are carried out across the empire to light each home. The sky did fall for me, but the rage lit in my center would burn every home in the great Valley.

It began with a peace offering. After a lost skirmish, my master gave me to a pale man with floating temples and creatures yoked to his will, who sought to destroy the Hueyi Tlatoani. I learned his language and became first his translator, then his ambassador. I negotiated an alliance with the Tlaxcala, spied into Tenochtitlán and steered his steps until Monteczuma lay dead at his feet. In those heady days of power after powerlessness, I wanted to destroy the world as it had my family. I had gone from groveling at the foot of the unworthy to giving orders that made cities fall.

Vengeance is a power of the gods, like the spinning storm or the endless sea and, like them, it is a power uncontrollable by man. We can pray and dance and enact our rituals to sate its fury, but the eyes of mortal man cannot see where it will end. When we took Tenochtitlán, we discovered bodies in every house. The disease that seemed to follow in the Spanish wake left dying children in the arms of dead mothers across the entire Valley of Mexico. The Spanish destroyed the power of Aztlán, but they built a new empire in which they are the gods and my people are penned into tiny settlements or imprisoned in cramped mines. They destroyed the order that killed my father, but built a new one that tortured my children.

I do not know your heart. I felt that mine would never be at peace until my rage was sated in blood. I do not know what I would have chosen to do if I could have seen the end result of my actions. I do not know what you should choose to do, but you should make the choice secure in the knowledge that there will be consequences you do not foresee. Battle begets a cycle of battles, with chaos stirred by its winds and never a clear victor. You should enact your vengeance only if you are willing to be prey to forces yet unseen.

Born to the Cacique of Paynala at the fringes of the Aztec empire around 1500.  Died either in 1550 of causes unknown or of smallpox between 1527 and 1529.  After being given to Cortés along with 19 other young women slaves by the Cacique of Tobasco, Malinalli became translator and advisor to the Spanish expedition, negotiating the alliance with the Tlaxcala and helping plan the defeat of the Aztecs and the takeover of the Mayan peninsula.  She bore a son to Cortés who was tortured for conspiring against the Spanish Viceroy and her daughter by her Spanish husband Juan Jaramillo was disinherited after his death.

TO SEE SOME OF THE FEW PRIMARY SOURCES, CHECK OUT WOMEN IN WORLD HISTORY.