Am I Missing Out?, answered by Cecily Neville 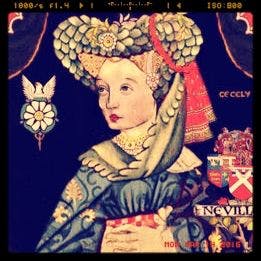 I’m a 44 year old husband and father of two wonderful kids. I just “celebrated” my 15th anniversary as a CPA for a high-end financial institution. The pay is amazing – more than I ever anticipated making – the benefits are great, the coworkers are nice enough, and I’m miserable. Well, maybe miserable’s too strong. But I’m done. I so badly want to be getting out of this job and do something better for the world, or at least better for a few people. The problem my family and I have come to rely on the money I make, and I know anything else would be a significant decrease in salary. I’ve hinted to my wife about my thoughts, but I get the sense she doesn’t want to hear it. So, what do you think? Do I suck it up and stay in purgatory for the sake of my family, or do I jump off the deep end and see what comes?

Am I Missing Out

Thank you for giving me the unvarnished truth. I hope it was good practice for giving the unvarnished truth to your wife.  I’m afraid hints simply won’t do.  You must tell your wife about your concerns – not your decision, mind.  You are parents together, so your parenting must be together.  I offer you not a declaration from some innate wisdom, but the bitter lessons of my mistakes.  I’ve lived a long life, long enough to see an army of grandchildren and even some great-grandchildren.  Long enough to see how my choices and my husband’s echoed through our children’s lives.

I raised our girls and left the raising of our sons to my husband.  He raised them to be warriors like him – yes, warriors that were the envy of an age, but warriors whose strength was untempered by restraint.  They grew into his image even after he was gone. They became ambitious, impulsive, proud men who died before their time.  My daughters I raised into copies of myself, intelligent women who shaped the politics of nations with discreet letters and diplomatic visits to influential family, but stayed cautious and out of danger.  Had we shared the raising of our children, we could’ve taught our sons control and given our daughters the courage to take the risks that could’ve save our sons and grandsons.

I believe that you and your wife will need to look at the whole field and develop a strategy.  You see only staying put or leaping into the abyss.  Surely, there are more paths than just those two.  My husband saw only one path before him: to demand the throne.  He knew he would be a better king than our feckless leader.  He had the right to lead and a record of accomplishment.  I believed in him, believe to this day that his rule would’ve made England first among nations.  But he demanded the deposition of a leader by force of personality then by force of arms, and was caught unaware when the king’s party fought back.  I lost my husband and one of my sons to their counterattack.  I would’ve lost more, had I not managed to send the younger ones to the safety of my daughter’s house in Burgundy.

This is the greatest mistake my Richard and I made.  It was not to be ambitious; we were proud, but we had much to be proud of.  Why should my husband bow when he was made to lead?  No, our mistake was that we did not plan, not for our children’s safety and not for his.  My husband was outnumbered five to twenty because he did not plan.  When the army was bearing down on him, he took our son into an indefensible final stand.  He thought it was his only choice.

Should you stay and be miserable or leap into the abyss?  Neither.  You should find one of the paths to your goal that also protects your children.  If you can’t see it yet, ask your wife to help you find it.

Born in 1415 in Raby Castle in England to the Earl and Countess of Westmoreland, granddaughter of John of Gaunt and great-granddaughter of Edward III. Died 1495 in seclusion at Berkhamsted Castle in England.  Called “proud Cis” and the “Rose of Raby”, Cecily Neville was one of the most beautiful women of her generation and married to Richard of York, the most powerful man in England after the king (perhaps?) and next in line for the throne.  When he tried to seize the throne from the enfeebled king, he and his son were killed in the Royalist counter-attack.  Cecily spirited her younger sons out of the country and supported her eldest son to take up his father’s cause, which eventually made him Edward IV. She exerted a subtle diplomacy over her family connections, but her power over Edward was not enough to prevent him marrying a commoner, nor to protect her son George from the punishment for his treason.  When Edward died, her last son Richard murdered her two grandsons to seize the throne and Cecily retired to a secluded religious life, earning a reputation for piety that she keeps to this day.

To see an interactive family tree with Cecily’s story, check out Philippa Gregory.

To learn more about Cecily the character, check out Margaret I.