Feeling the Pain of a Narcissistic Mother, answered by Catherine the Great 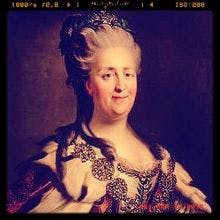 My mother behaves as though nothing exists outside of her immediate conscious bubble. I didn’t know that solipsism was really a thing, but she genuinely believes that what happens to other people doesn’t happen at all. Advice?

Feeling the Pain of a Narcissistic Mother

Before I say anything else, I need to acknowledge that this is a bad situation. I wish my words could transport you to the most perfect of all worlds. Words, however, are merely the form of ideas and while ideas can change the future, they are powerless to alter the present. It is good to know the limits of your power. Any good strategy begins with an honest assessment of the position.

I have learned through bitter experience that you cannot change your mother. My mother always wanted more. More power, more influence, more wealth, more than birth or marriage gave her. I grew up knowing she was beautiful and I was not. I grew up knowing my brother was valuable for what he might inherit or achieve. Even when the powerful began to take an interest in me, she never could.

She was shocked when the King of Prussia arranged for me to travel to Russia to possibly marry the heir. Even then, though, she didn’t see me. She took the Prussian money sent for me to travel and spent it on gowns for herself. She was utterly unembarrassed when Frederick caught her and provided me with gowns directly. In Russia, she alternated between demanding a higher station for herself and intriguing against the Empress who was deciding whether or not I was to marry her heir. Even when I finally became Grand Duchess, it wasn’t enough.

There was a moment when she was grumbling about being seated below me at the table, when I suddenly saw her. She had always used my lack of prospects as a reason for her disdain, but I was about to become ruler of a vast and wealthy nation. She told me I was dull and unlikable, but I had found allies in every difficult situation she had placed me in. She called me selfish whenever she didn’t get her way, but two monarchs and their courts had been scandalized by her treatment of me. I realized her feelings about me were utterly disconnected to my personality or my actions. Nothing I could do or say would make things better and they surely couldn’t get worse.

I mourned a loss and discovered my freedom in the same moment. I mourned the relationship that could have been and the mother that I still kept hoping would emerge. One never really fully heals from that kind of primal wound. I never did, at least. After I married, Empress Elisabeth not only threw my mother out of Russia, but forbade her to write me. I never saw either parent again. Empress Elisabeth eventually died and my nightmare husband reigned long enough to anger every person he came into contact with. I seized power and when I could hold it, I instituted a rule by law, not kleptocracy and brought Russia into the Enlightenment. I wrote to my parents, but I think there was some small part of me that mourned the mother that could have been. After all I fought to accomplish and all the turbulence of my romantic life, you can still feel her injuries in my memoirs. (I wrote several.)

What I did find was the terrible freedom of that loss. She would never approve of me, so it didn’t matter if I danced upon her wishes or treated her like smoke lingering in the air. I began to pick her thistles from my skin, painstakingly and one by one. It was gradual work, but I diminished power of her opinion by reminding myself that it was based only on her internal whirlwind.

I would encourage you to find the same freedom. If your mother is unaware of the facts of your life, you do not need to listen to her judgment of it. If she thinks only of herself, she will never approve of anything you pursue, because your goals are not hers. When she lashes out, remind yourself of the inevitably of her distress and issue the standard, but truthful, “I’m sorry you feel that way.” You can love your mother without giving her power over you. I would argue that removing her power to hurt her own children is a more loving act than being vulnerable to her venom. Draw boundaries that you can enforce with action and absence.

Most of all, you must give up the hope that she will change. She won’t. The pain you are feeling is the separation between her actions and the ideal you have in your head. Idealism separated from reality is merely a cudgel. When you stop beating yourself with it, you may be able to find some compassion for the flawed, angry woman in front of you. The less power you give her to hurt you, the better your relationship with her will be.

Born in 1729 in Stettin Prussia where her father, a minor prince, was governor.  Died in St. Petersburg, Russia in 1796 after ruling Russia for thirty-four years.  As a child, Catherine impressed King Frederick of Prussia enough that he remembered her when international politics required him to look for a bride for Russia’s heir.  When Catherine’s husband turned out to be cruel and incompetent, she overthrew him and became sole ruler of Russia.  Influenced by Enlightenment philosophers, Catherine spent her reign improving the lives of all Russians.

FOR A GREAT BIO AND PODCAST, CHECK OUT THE HISTORY CHICKS.