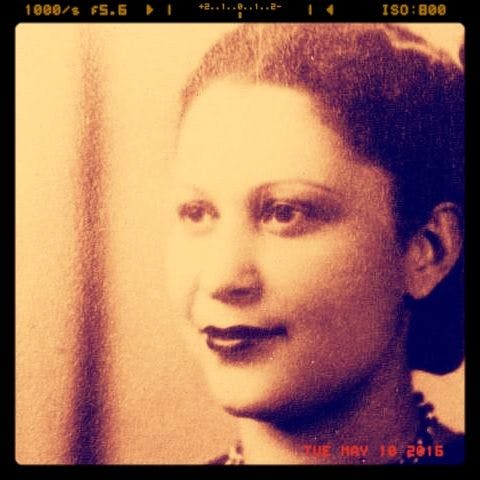 I know I’m lucky. I married an amazing man. I’m healthy. I have great friends and a stable job I enjoy. It’s not the life I imagined for myself, though. I was ambitious and driven, wanting an extraordinary creative career. I still create, but it’s not my career. Some of the people I was young and hungry with have become wildly successful. I am truly happy for them and they absolutely deserve their success. It hurts, though. I thought we would go forward together, would make our voices heard in chorus. I’m not jealous, but I want so badly to be with them. Do I just accept that occasional pain? I know it is a small want next to all the blessings I’ve been given.

Your words “young and hungry” provoke memories in my body and my spirit. You said more than you intended, I believe. For my siblings and I, starving children in Santa Clara, hunger was a deep chasm stalking at our heels, a demon to eat us from inside, and a terrifying lesson in the limits of our parents’ power. To see starvation through the eyes of a child is to be forever refigured. I worked hard to get through school, to be able to earn money for my family. Even when the struggle to feed us had ended, I felt driven to work. I worked through my first marriage in Puerto Rico and my second in New York. When I had the black dog on my back and termites in my liver I could force myself to work, but not to write. You speak of a hunger of the spirit, not the body, and a hunger of want, not of need. I wonder, though, if like me you carry the echoes of a young girl demanding a security that has already been met.

Where is the warmth of Heaven, pouring its dreams of love on broken spirits?

Your question confuses community and recognition. Or do you believe that they are connected? The choir of voices is a lovely metaphor, but surely you realize that image is not reality? Community is a blessing as rare as it is proclaimed to be universal, especially if you are different. I searched for home throughout my life, in Puerto Rico’s treintistas, in Havana, in New York, in two marriages and one epic affair. There was never a place where all of me fit. My poetry was read and respected everywhere I lived, but my poems were my only community. Your letter tells me of a strong marriage and friends you love. You are not barred from a perfect community by your lack of success, you have gathered one that is perfect for you. It is fine to wish for a creative career, but do not imagine that renown would gain you anything other than the opinion of strangers.

As to creation itself, I have no counsel beyond that which you must surely feel, if your drive to create has outlasted your drive for fame. You can no more control the response to your work than you can control the tide on the beach or the birds in the sky. We treintistas wrote and created to give us a national identity. Nothing short of liberation would do. Our work lives on, though our goal remains elusive. I wrote of my woman’s life to stand in my own truth. I could not imagine an entire generation would take those words as a banner. You create because you must. Worrying about your audience is to seek to soften the sun.

The past is only a shadow emerging from nowhere.

As you note in your letter, you are blessed. Revel in the community you have, rather than the one you imagine amongst those you once knew. Do not seek anything from your creation other than the unidealized truth, but seek it bravely. And when you hear the echo of that young hungry girl, take a quiet moment to assure her she is forever safe and fed. She doesn’t need to cry anymore.

Born in Carolina, Puerto Rico on February 17, 1914, the eldest of thirteen children, six of whom died of malnutrition and other poverty-related diseases. Died in Spanish Harlem in 1953 from pneumonia after collapsing on the street during an extended struggle with depression and liver cirrhosis. After receiving a teaching certificate from the University of Puerto Rico at age 19, Julia became active in the nationalist community that would be called treintistas and married reporter Rubén Rodríguez Beauchamp, whom she divorced at age 23. She spent the next two years touring Puerto Rico in support of her two books Poema en Veinte Surcos and Canción de la Verdad Sencilla, before moving to New York in 1940 with the love of her life, Dominican political exile, Juan Isidro Jiménez Grullón. In New York, she wrote many articles in Spanish language papers, eventually becoming Arts & Culture editor of Pueblos Hispanos, and the final book of the poetry that became her legacy.

Read more about her legacy at VoicesofNY.org  and check out her poetry at AllPoetry.com.