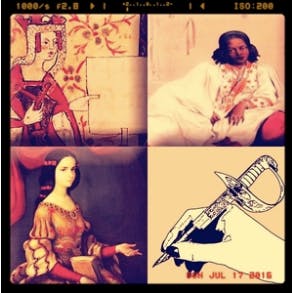 So much is happening online right now that feels really sexist. It’s on social media, in politics, even escapist entertainment. I can usually brush it off, but for some reason, I feel targeted. I found myself crying the other day over a friend who describes himself as a feminist posting something misogynistic on Facebook. It wasn’t even a repost. He just attacked a political candidate with really sexist imagery and captions. It’s just so scary right now. I feel like there’s so much anger directed at women. How do I deal with this? Do I just stop going online? What do I do in the real world?

We at the Office of Badassery know exactly how you feel.  It’s scary to be female-identified online, especially at this particular moment in time.  We are also at a bit of a loss for how to address this question.  The internet is such a game-changer that there’s really not a great historical parallel.  So instead of finding one women to answer your question, we decided to host a round-table of three women whose stories are intertwined with words and public opinion.  We hope it helps.

Editor of Badassery: So, this is a big question, how to deal with gendered language, and there’s no easy answer.  You are women from different times with different callings, but you all did things that women weren’t supposed to do.  We thought that you might have something to say about each other’s experience that would help-

Gudit of Ethiopia:  You thought.

G:  YOU thought we’d have something to say.  If we’re going to explore gendered language, let’s start with the basics.  Men who lead say “I” –

Empress Matilda:  England’s kings say “we” to show that ruler and ruled are indivisible.

G:  She meant the modern Western woman “we”, dressing their will in the veil of group unity.  As if women could get strength from numbers.

E:  Okay, I’ll watch my use of “we”. Gudit it sounds like you have a lot to say.  Can you tell me a little about you?

G:  I saved Ethiopia.  The Aksumite king led their army to chase oases through the desert.  They died with sand in their mouths and his sons were fit only to squabble over the trappings of power.  I brought order, enough to last beyond my lifetime, beyond fifty of my lifetimes.

E:  Is it fair to say that not everyone shared in that peace?

G:  I did not say peace.  I said order.  And it is fair to say that the men who write the stories do not write mine accurately.

E:  And you didn’t get to tell your own story.  Now Juana, you did write stories.

Sor Juana Inés de la Cruz:  Plays, poems, theology.  I was so eager to read and write that I taught myself as a small child, piecing together what I could badger from my grandfather and his priest with the books I found in the chapel.  My words brought me to the attention of the viceroy and secured me a place in the church so I could write in peace. In the campos, at court, in the convent, writing was my life’s blood.  Words are the only tools we possess to touch the Divine.

M:  Language always seemed like a sword to me, a tool from the domain of men.

J:  Words are prayer, open to all who seek the light.

M:  Words are what men shape them to be.  My father was a great king.  My first husband was a great emperor.  They demanded respect and their lands ran better for it.  I learned from them, modeled myself on them, and was derided for it.  Arrogant, they called me.  Overwheening.  My father demanded the moon and raised hell if he didn’t immediately get it.  And he was adored.  The first lesson of my marriage was to learn to soothe my husband’s sudden rages, but he was mourned like a second Calvary and I was declared intemperate.

E:  Well, that’s what the letter writer’s question is about, isn’t it?  She feels like the words used in the public sphere are based on a private misogyny.

G:  Words have no power.  Actions have power.  The Aksumite slurs did not keep me from taking the country.  The stories they told after I was safely dead did not keep the dynasty I founded from three hundred years of rule.  Their words have only the weight you give them, so do not add to their power.  She should do whatever is in her to do and pay no more attention to whispers than the wave on the sand.

M:  Each individual word may be as light as a grain of snow, but a snowstorm pulls down the side of a mountain.  I made mistakes when I was in power, but every mistake I made was proof that my barons were fools for supporting me, while every mistake Stephen made was a misstep that he’d learn from.  All those whispers from country squire to alderman, from baron to earl, combined to drive me from London.

J:  Words brought me near divinity.  My name destroyed me.  It was the last thing I wrote.  I was nearly thirty years in a convent when my treatise on the soul of women brought the Inquisition down on me with all its threat and thunder.  I could renounce my writing or my body.  I signed their paper with my own blood and watched them sail away.  I thought when I was alone again in my protected cell, I could sneak back to my paper and pen.  But the words in my heart felt faded, cheap, as if something had been lost or given away.  I don’t know what would have happened if the plague never hit.  Maybe the words would have flowed as they once had, maybe the fount was blighted forever.

G:  You are so dramatic.

G:  That is a luxury my people did not have.  We had no space for mourning, only action.  A woman has time for drama when she is fed and housed and safe.

J:  You keep dismissing words, but you were more harmed than any of us.  I’m on the currency, Matilda’s inspired countless women, and every church in Ethiopia claims you tried to burn it down.

G:  Only the ones my brothers used as armories!  You can’t house weapons and then play holy victim.

J:  I knew it bothered you.

G:  Fine.  Does it bother me?  Yes.  A little.  But you know what?  Anyone who sees my story will see the truth peaking out.  A woman so incompetent her reign lasted forty years and saw the territory spread from the Nile’s lake to the great rift valley?  A ruler so hated that neighboring nations ceased their attacks and her successors ruled for three hundred years?  You cannot bury success, no matter how many words you pile upon it.

M:  But to achieve success, you have to get people to work with you.  Your enemies denigrated your memory, but mine undermined my rule.  It’s all very well to say words don’t bury success, but how do you achieve success when the people you need refuse to respect you?

E:  This is what the letter-writer worries about, correct?  She’s not concerned what some future men may say, she’s worried about what will happen in her own life.  Does her friend’s post mean she can’t rely on him?  Is the anger she’s sensing going to prevent her from finding a job or a partner that treats her well?

M:  I think she’s right to worry.  My war to regain my throne lasted twenty long years.  I have many regrets, but my worst regrets are when I think of how it all could have ended so early if I just listened to what people told me about themselves.  I was shocked when Stephen stole the throne, shocked by each and every defection to his side.  But when I look back at the last years of my father’s rule, Stephen, Henry, the Beaumonts, they all made their characters so clear.  Even my father tried to tell me what would happen, forcing the earls to swear their allegiance again and again during his lifetime.  I should have heard what they said and been on my guard.

G:  Yes, but you can’t live on your guard.  You must sleep sometime, eh?  I would encourage Ms. Afraid to be very careful at what she takes to heart.  Just as she is concerned that these men are projecting their hate onto political women, she must be sure not to project herself onto her leader.  Your leaders can take care of themselves.  Be wary of taking into your heart any criticism directed at another.  Note what it says about the person who said it, of course.  Add it to your mental landscape.  But do not make your spirit into a shield for one who would not even notice the arrows.

E:  Well, that brings us nicely into the final aspect of the question.  What do you think the letter-writer should do?

J:  Gudit is right.  We are shaped by the words we make space for in our souls.  Be wary of what disfigures your thoughts.  That may mean taking a break from social media to help get perspective on what is serious and what is just dust in the wind.  Be mindful of the words you speak and write, for they form you more than anything else.  If you can, try to return hate with peace, but most importantly, never lend your name to something that against your belief.

M: Listen when people tell you who they are.  That doesn’t mean cut out everyone who says something you disagree with.  Listen to everything they have said and see everything they’ve done.  Is it possible you are learning that some of your friends don’t actually like women very much?  Of course.  But you need to place their comments in the context of everything you know about them.  If your friend’s comment makes you look back on his actions or words and see a misogyny that you missed, you should accept what he has told you about himself.  But if you are baffled because his comments seem out of step with everything else you know about him, you should talk to him about what you saw.  He may be surprised by your question and you may be surprised by his response.

G:  You cannot control the shaking of the earth, only how you move through the landscape.  Make your actions count, each one of them, and you will find the words of strangers matter less.

E: Thank you, ladies, for sharing your stories with us.  Afraid to Speak, we hope it helped!

For more on our guests, check back for their individual columns coming up.